We asked Jon to take a look at Magic the Gathering's new set release, Kaldheim, and share some of his thoughts.

When Kaldheim, the latest Magic: The Gathering expansion, released on January 28 to both Magic: the Gathering Arena (MTGA) and Magic: the Gathering Online (MTGO), I found myself wrapped up in the shared excitement with a large portion of the Magic community over finally having a set modelled around Norse mythology and fables, and the fact that Snow was reintroduced into standard again as a supertype. The Limited environment has proven to be fun and deep, with multiple viable strategies available for players to explore. As this article is focusing on the limited environments of draft and sealed, rares and mythic rares with not be a heavily touched upon.

To start things off, I want to shine some light on my favorite limited card in the set: Svella, Ice Shaper. 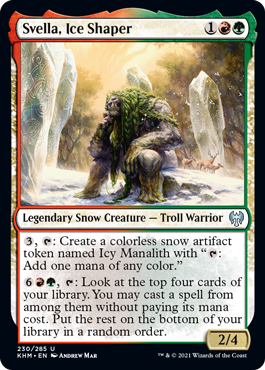 Svella does a lot of things very well. As a 2/4, she easily blocks everything with 3 power or less, which just so happens to make up nearly 83% of creatures at the common and uncommon levels. Her first activated ability of pumping out an Icy Manalith becomes more relevant every game I get to use it. Not only does the mana rock give you access to all five colors, but it also gives you those colors in snow mana, which is especially useful as green has some of the best low-rarity snow payoffs. If you are the aggressor, dropping her on turn three, pumping out an Icy Manalith and foretelling a card on turn four is both ultra-efficient with your mana and generates a lot of tempo that can put your opponent too far behind if you can maintain the pressure. However, even as the player on the defensive, a 2/4 body that both ramps and fixes at the end of your opponent’s turns can often delay the game enough to allow you stabilize the board and start activating her second ability, and boy is that fun.

For anyone that has been able to activate the ability on Golos, Tireless Pilgrim, you know how fun it is, and if you have been on the receiving end of that activation, you know how quickly you can lose the game because of it. While only looking at four cards may not seem like a lot, in limited that still is 10% of your deck, and since you can activate it at instant speed it allows for Svella to both block and activate on your opponent’s turn. Oh, and yes, you can cast creatures from this ability at instant speed, it is that good.

Svella, Ice Shaper does a little bit of everything and has become somewhat of an uncommon planeswalker in my eyes, it is worth noting that many of the bomb rares and mythics should still be taken over her as first pick. That aside, Svella is my favorite card to play in both draft and limited, followed closely by Path to the World Tree, Dwarven Reinforcements, and Avalanche Caller, all of which have vastly outperformed my expectations.

On the other side of things, there are the cards that have lost me many games and consistently let me down, and the biggest culprit has been Kardur’s Vicious Return. 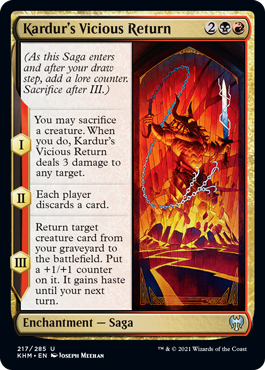 Upon first seeing this card, the synergy between both the first two abilities and the last one made me very excited, and that excitement carried on until my third consecutive 0-2 drop on MTGO trying to make this card work. While it can win you games if the timing is absolutely perfect, that is rarely the case.

The dream case of dropping this on turn four, sacrificing something small and unimportant like an Elderfang Desciple or a Fearless Pup to kill a creature with three toughness, discarding a 6 or 7 drop like Doomskar Titan or your bomb rare, then bringing that back on turn 6 with a +1/+1 counter is music to any red-black player’s ears. Unfortunately, I have found that, at best, only one of the three abilities do exactly what I need them to do or even close to it. More often than not, Kardur’s Vicious Return is either a four-mana lightning bolt that makes you sacrifice a creature that you either want on the battlefield or an extremely slow reanimate spell on the condition you don’t need to exile that creature from your own graveyard to kill something else off with a Weigh Down.

While there is definitely upside to this saga, do not be fooled by the potential of getting your bomb mythic onto the battlefield with an extra +1/+1 counter on it, for not only is that only a minor upside, the black-red sacrifice deck is one of the worst in this limited format as it lacks any serious payoffs. Kardur’s Vicious Return is clunky at best and useless at worse, and if you are considering taking this as an early pick in the draft, you will most likely be better served by simply taking whatever snow land is in the pack.